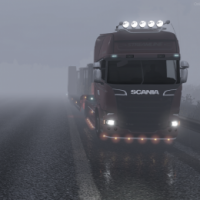 This might not be the right place to ask for help on this, but I thought you might have some answers regardless.

So here's the problem. I just upgraded my PC from windows 8.1 to 10, and afterwards, recording with OBS has been nothing but a mess. It's very unpredictable in the way it handles. Now, OBS is the software I use to record gameplay in ETS2MP, and it has worked like a charm until now. What happens is that when I watch the playback of the video the image freezes and changes up every now and then. Sound doesn't seem to be affected. What's odd though, is that when I'm in the menu, everything is as it should, and that really messes with my head. I uploaded a video so you guys can see for yourself. Watch it till the end, and you can see the difference between being in-game and in the menu.

Also, there has also been cases where it is simply a black screen all the time, yet sound is still as usual. Not sure what makes one happen over the other.

If anyone has any clue whatsoever on what could be happening here, I would be very thankful! I have tried messing with settings, both on obs and euro truck with no luck. I tried running them in compatibility mode for both windows 8 and 7, but still no results. I even reinstalled obs, but that changed nothing as well. So, yeah, this is pretty frustrating, but maybe you guys know something I don't!

40 answers to this question